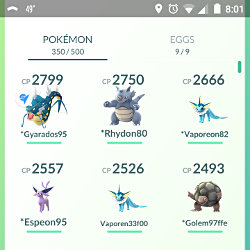 Last year, my kids got me playing Pokemon GO. It's been a lot of fun. But like everyone else, there are a few things I'd like to see improved in the game. While my kids are at the movies with my wife tonight, I thought I'd take a few minutes to share one of my ideas for the game.

One of the most cumbersome aspects of Pokemon GO is finding a particular Pokemon in your ever-growing list. Scrolling through the list wasn't so bad in the beginning when it contain under 100 Pokemon. But with Gen 2 out, and upwards of 300 Pokemon in storage, it has gotten downright unwieldy.

Why does this matter?

First, for finding that Pokemon that you want to power up, once you've collected enough stardust.

But more importantly, when you're selecting your six Pokemon to battle or train in a gym with.

The game automatically selects six Pokemon for you that would be useful against whatever is in the gym. For example, to battle a gym full of Vaporeons, the game may recommend using your strongest Jolteons and Venusaurs, because electric and grass types are strong against water types.

While it generally does a good job of selecting a good group of Pokemon for you, what it doesn't do so well is put them in the right order. For example, if you're battling a gym with a Vaporeon on the bottom and a stronger Flareon just above it, the game might recommend using a Jolteon and a Vaporeon.

Since switching Pokemon mid-battle takes time, and you take damage while you're doing it, it's a good idea to take a look at the Pokemon you're up against, and sequencing your team of six so that you'll have type advantages as much of the time as possible without having to switch mid-stream.

And that's where you'll want to be able to find your Pokemon quickly in your list.

It's usually not too bad when battling, because the Pokemon you'll be using will generally be among your strongest. So if you sort by CP, they'll all be near the top. Where it gets seriously unwieldy is when training.

When training to build the prestige of a friendly gym, you won't want to use the Pokemon that the game recommends. Why not? Sure, they'll be the right types to give you an advantage. But since the game will recommend using some of your strongest Pokemon, you're usually going to be better off swapping out the entire team, because you can build prestige much faster by using Pokemon with lower CP.

I won't get into the entire formula, but what you need to be aware of is that the amount of prestige the gym gains when you train is based on the ratio of the CP of the Pokemon you defeat and the CP of the strongest Pokemon in your team of six. So if one of the six is your 3000 CP Dragonite, even if you don't use it in battle, you're going to gain far less CP than if the strongest Pokemon you take in to train with has 1500 CP.

Generally, when I train, I try to have my strongest Pokemon have about 1/2 to 2/3 the CP of the Pokemon I'll be battling. That way, I can often gain as much as 1000 prestige for each Pokemon I defeat. If I go in with a really strong Pokemon on my team, I may only gain a couple hundred prestige total.

Because of all this, it's important, when training, to be able to find Pokemon with mid-range CP that have type advantages over the Pokemon in the gym. And with a few hundred Pokemon in storage, that is an incredible pain.

Here are my suggestions to Niantic for how they could solve this problem, and make browsing one's own Pokemon storage more interesting at the same time.

First, enabling filtering of the Pokemon list based on Pokemon type. For example, let me list all of my electric types only, or all of my grass and electric types. Basically, they'd just need to add a button that brings up a list of all the types with checkboxes for each. When none are checked, everything shows. But if I check one or more types, only the Pokemon of that type appear in the list.

Second, enable tagging of Pokemon with arbitrary tags, and enable filtering based on tags.

Right now, you can mark a Pokemon as a favorite. And you can sort by favorites. So yeah, that would be one way to pick a team and then select it quickly from the list before a battle. But since you're going to want different teams depending on what's in the gym, changing your favorites just for one battle would be far too much work.

If your best Pokemon for training against a Gyarados, for example, could all be tagged with some special tag, then when you're going up against a gym full of Gyarados, it would be easy to quickly select the team you want.

Oh, and by the way, Go Team Mystic!