The problem with CD racks

I recently moved one of my CD racks out by my computer, and picked my favorite 100 CDs to put in it. The rest stay in the bedroom where they're less accessible. The process of shuffling all those CDs around reminded me of one of the really annoying things about CD racks--unless you don't bother arranging them in any particular order, inserting a disk in the middle is a painful process. The little fins in the rack that divide each CD from those next to it force you to move every single stinking disc one by one (unless you want to try moving a few at a time, which works sometimes, but is still a pain). 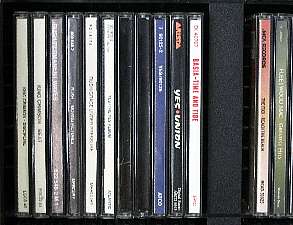 Today, I came across a stack misplaced discs which included some of my favorites. So naturally, some had to come off the rack to make space, and every single disc had to move. Ugh. Fortunately, I came up with a solution that made it a lot easier. Instead putting one disc into each slot, I turned them all 90 degrees, as seen in the photo to the left. Not only am I able to easy move big chunks of discs at a time, but I discovered that I'm able to fit 11 discs in the space that used to only hold 10! With the exception of one cubby hole that has a four disc set in it, I was able to keep another disc in each, so now I have my favorite 109 discs by the computer.

How did I not think of this before? Unfortunately, this is the only CD rack I have that's divided into cubby holes. Fortunately, I have a solution for the other ones that won't get me any extra space, but will have the speed advantage: I'll still turn the discs 90 degrees fromt their standard orientation, but instead of setting them on dividers that are part of the rack, I'll put an empty CD case in every 11th slot. The discs that are in use will set on those.